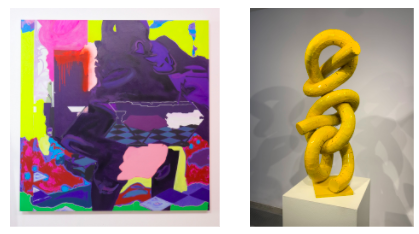 New York, NY   Voltz Clarke Gallery and Monica King Projects are pleased to collaborate this September with a two-person exhibition: Lauren Ball and Mike Hansel: Synergy.  These artists, working from New York City and Middletown, Rhode Island share a vibrant interest in the collision of the organic with the architectural, the revelatory effect of incongruous forms, and art as a conduit for memory.  There will a Public Opening Reception with the artists on September 30th, 6-8 PM

Lauren Ball’s works presented in Synergy are from the artist’s new series, Invisible Touch, consisting of paintings that explore three-dimensionality and collective memory. The works incorporate modes of image making that the artist has explored for over a decade: drawing, collage, digital archival print, and painting. The artist’s present and past enter the work through the color sampling of personal and found photos, such as a photograph of her mother pregnant with her and her twin brother. The notion of individuality for Ball is of particular interest, as duality is inherent in being a twin. This personal trait manifests in Ball’s artwork through her history in creating multiple images via print, which inform her singular paintings. Ball’s works challenge spatial cohesiveness, which creates dynamism that calls the viewer to a social space in painting where the confluence of architectural and natural forms beckon our own memories to collide.

Mike Hansel’s work has become known for his ability to create highly crafted, organic pieces that contradict what we might expect from such rigid, industrial materials. Hansel uses sculpture as a means of pointing people away from what they take for granted towards an oddly humorous domain composed of vaguely familiar elements. They are re-invented associations made between careful observations and the half-forgotten elements of memory. Hansel’s new body of work in Synergy is filled with energy and optimism.

“An interest in the elements of line, plane, and volume has led me to these gestural compositions that play with themes of balance, support, instability, and insecurity. The careful placement of form references the structure of the human figure while searching for spatial orientation that affects our perception of mass. The geometry of interacting segments of steel somehow establishes an unlikely duality with the soft organic patterns found in nature. These small compositions happen as three-dimensional drawings similar to Ball’s pensive process; part of an exploration for designs that can be realized at a much larger scale.” Image 1 of 3
ABOUT THE ARTISTS

Voltz Clarke’s ​​Mike Hansel is a mid-career sculptor who lives and works in Newport, Rhode Island. After obtaining his Bachelor’s degree in Fine Arts from the University of Cincinnati, Hansel attended the University of Pennsylvania where he received his Master’s degree in sculpture. Hansel’s work can be found in private and public collections from Quogue, New York, and Newport, Rhode Island, to Los Angeles, California.

Voltz Clarke Gallery maintains a roster of emerging and mid-career artists focusing on introducing international artists to the New York and wider US market. Founder Blair Clarke believes one should cast the net wide in order to identify new talent. In a market, which is increasingly globalized, she is intrigued by the rich diversity in work found often in unexpected places. In 2015, after thirty years of experience at Christie’s and Sotheby’s auction houses, Alistair Clarke joined the gallery as Co-Director.

Monica King Projects is a recently launched art advisory and nomadic exhibition platform.  In tandem with mounting creatively fluid exhibitions, Monica King Projects will also be hosting a year-round intimate artist residency and creative retreat at a two-acre forested cottage in Litchfield County, CT, serving as an incubator for artists to experience respite and unbridled creativity in these days of cultural and social redefinition in the world.