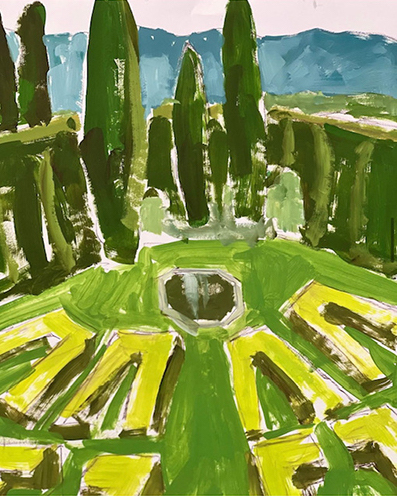 Holland Cunningham is an American painter whose recent body of work reflects on her studies at the American Academy in Rome. Spending six weeks at the American Academy in Rome had a positive impact on Cuningham’s work and expanded her oeuvre, since there were already ties between her abstract work and some 18th century Italian frescoes and paintings. Cunningham continues to make work inspired by the paintings of Tiepolo and other late Italian artists, as well as frescoes in the very ancient churches and ruins of Herculaneum and Pompeii.
The American Academy inspired Cunningham to explore making paintings inspired by such works of art in a more literal way—a slight move away from her current series, “Other People’s Memories.”  However, both bodies of work follow the theme of memory and what remains. Whether it is an ancient fresco in an ash-covered palazzo in Pompeii, or a moment in time of a family snapshot, both reside in the past, but the memory remains, especially as the viewer projects their own histories or memories onto the work Cunningham creates. Cunningham was born in Roanoke, Virginia in 1967 and educated at the University of Virginia where she studied Art History and Studio Art. She continued her studies at the Art Students League, National Academy of Art and Design, and New York School of the Arts. Most recently, she was a resident at the American Academy in Rome Spring 2022. She was a resident at the Bau Institute in Puglia, Italy in the summer of 2012. She currently resides and works in New York City.